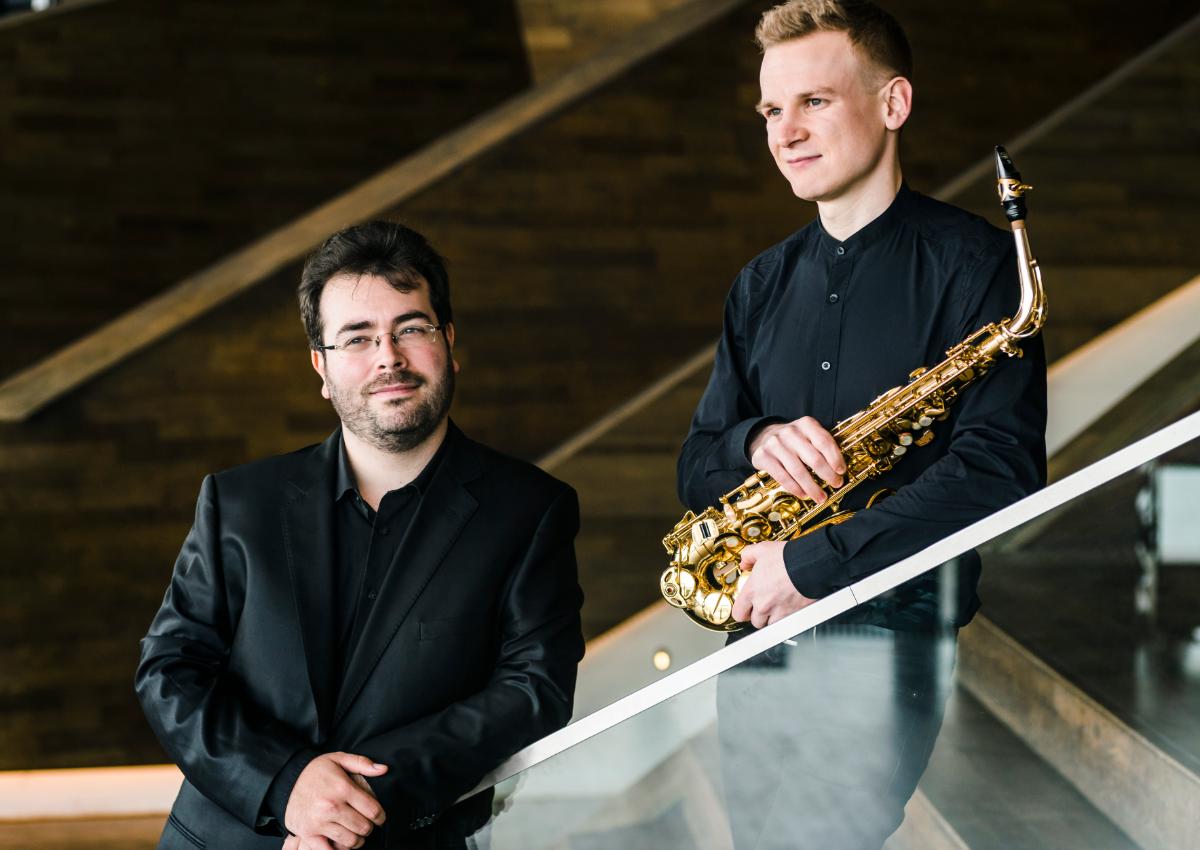 Andreas and Christos formed their duo in 2016 to present to a wider audience the full range of the saxophone/piano repertoire. They are working with Pierre- Laurent Aimard in Cologne and Arno Bornkamp in Amsterdam. They see as their mission to bring more attention to works of recent years, and to motivate composers to enrich the existing repertoire. In their performances, that have taken place throughout the Netherlands, they have also presented their own transcriptions of early 20th century music.

In 2018 they won the “Oorkaanprijs” which enables them to present their project “Lilith & Lulu” in “Grachtenfestival” 2018. They also participated in the Festival Jong Talent Schiermonnikoog 2018.

In 2019 Andreas and Christos will release their first CD recording of their project (“Lilith and Lulu”): a double portrait of the archetype of the femme fatale in music.

Andreas Mader (1993) grew up in Jochberg – Tyrol and got in touch with music from early childhood on. When he was 8 years old he started to get Saxophone lesson at the music school of Kitzbu?hel. Later he attended the preliminary study at the Conservatory Tyrol, where the base for his artistic career was laid. At the same time he could get his first experiences as a Soloist with the chamber orchestra “Innstrumenti” and the Ensemble “Windkraft – Kapelle fu?r neue Musik”.

Currently he studies at the Conservatorium van Amsterdam in the class of Arno Bornkamp, where he also received his bachelor's degree. Additionally, Andreas had the possibility to study with Claude Delangle at the CNSM de Paris with the Erasmus exchange-program.

As a soloist he has been in appearance with the Du?sseldorfer Symphoniker, the Kracow Philharmonic Orchestra, the Kammerphilharmonie Graubu?nden und the Philharmonie Su?dwestfalen.

Christos Papandreopoulos (1987) was born in Athens and is living in Amsterdam. He is currently studying contemporary piano music
in the class of Pierre-Laurent Aimard at the Hochschule fu?r Musik und Tanz in Cologne. In summer 2016 he participated in the prestigious Aldeburgh Music Festival where he performed works by Olivier Messiaen within the frame of the Messiaen Masterclass on the "Catalogue d'oiseaux". In 2015 he was selected to participate in the Piano Academy Pierre-Laurent Aimard/Tamara Stefanovich which was dedicated to the Klavierstu?cke by Karlheinz Stockhausen, hosted and organized by the program Musica Viva of the Bayerischer Rundfunk.
Christos has given solo concerts of contemporary music (e.g. Orgelpark in
Uitmarkt Festival 2015 and 2016, NedPhO-Koepel in
the finals of Gracthenfestival Concours 2016) and participated in contemporary ensembles (e.g. Grote Zaal van de Doelen in the series Ralph van Raat, Grote Zaal van Muziekgebouw aan ’t IJ under Ed Spanjaard). In september 2017 he participated in the closing concert of the Gaudeamus Festival with
Insomnio ensemble under Ulrich Pro?hl.
In 2016 Christos received the Frans Schreuderprijs (EPTA) for his research and was able to publish his article in the Piano Bulletin magazine. He has graduated from the Conservatorium van Amsterdam where he studied with Willem Brons and Ralph van Raat. He has received classes and masterclasses from pianists such as H. Austbo, R. Egarr and R. Levin.
Christos has also graduated from the National Conservatory in Greece with first prize. In 2009 he represented the National Conservatory in the festival Estate Musicale a Palazzo in Mantua, Italy. In 2003 and 2005 he won first prizes in the two major national piano competitions of Greece for young pianists.