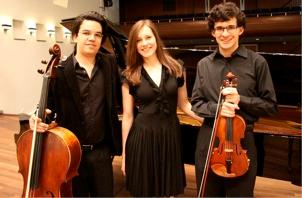 Piano Trio GIL was formed by students of Conservatorium Maastricht: Ieva Dudaite (Lithuania), Alfredo Reyes Logounova (Mexico) and Rolando Fernandez Lara (Cuba-Mexico) in 2012. Since then, the trio has been coached by cellist Alexander Petrasch, and followed masterclasses by violinist Gil Sharon, after whom it has been named. The ensemble performed several times during the Night of Classical Music at the Maastricht Conservatorium and has been recorded by Limburg 1 Radio. In March 2013 the piano trio has also participated in a masterclass by the Moscow Rachmaninov Trio. In May 2013, Piano Trio GIL has performed in the Museum aan het Vrijthof opening the concert of the Borodin String Quartet. The Trio has been a finalist of the Storioni Competition 2014. Currently, several concerts are being planned for its performance in various concert halls in the Netherlands, Lithuania as well as Mexico.